The region is rich of other interesting site-seeings as Agnishte, Borov rock, Moscue “Hadzhi Husein” and others. For more details, please ask your Guesthouses manager.

One of the most interesting among them is the site-seeing object Borov rock. The translation of the name means “pine stone” and probably originates from the fact that its ridge are covered with very old pines. The pines also have given the name of the nearby village “Borovitsa”. Initially the village was situated exactly in the area of the “Borov rock”, but later was relocated a little bit further. It is well known that the stone and the area were used from the local people as a place of protection during the Turkish slavery period.

The Borov rock is really impressive place not only because of the stone’s dimensions (113 m height, 180 m length and 120 m width) and natural beauty, but also because of the mystique in which the area is embraced. The local legends say that from this place Borov stone the souls have started their travel to the land of the death. One famous Bulgarians author, Kiril Kirilov, is writing: “The Borov rock is a special place, where the worlds of the death and the living ones are meeting. The energy of the place is so strong, that even a living person is able to feel its mystique pulling energy. In order to feel it a person should only close his/her eyes for several minutes.” Another legend is saying that a young couple in love have fell from the stone, running from the anger of the girl’s father, who was not supporting their love. The couple fell into the precipice and on their place in the stone have grew a pine and an alder.

Around the area of Borov stone are situated two interesting caves. The first one is cave “Prohodna”, which was inhabited for a long time in prehistoric and historic times. Today the local people believes that, if you place a small stone in it and make a wish, the wish will come true. The other cave is without a name and it has a spherical  shape. On one of its external walls is cut out a triangle window, through which can be observed the Brovishki monastery.

Nearby the village is a river, where you may rest in its shady pools and even have bath near the waterfall “Boboka”. See also section wine tasting located near by. 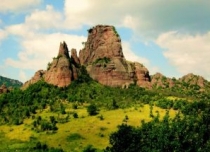 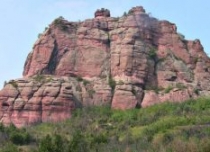 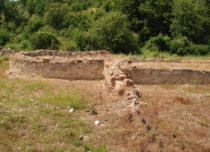 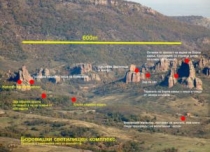